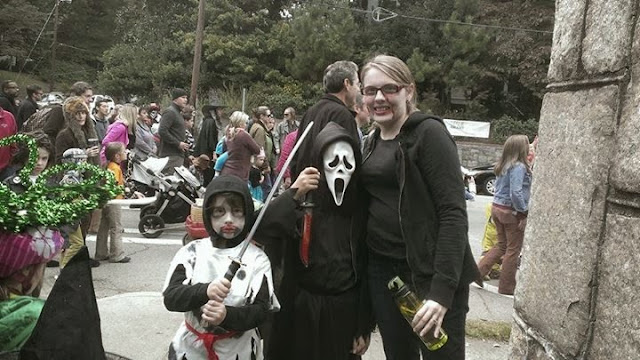 I must admit: I have a messed up relationship with Halloween. You all know I love my mama, but I attribute my Halloween dysfunction to her and my conservative Southern Baptist upbringing. Well, I can’t really blame Mama too much. It was the 1980s – the height of the Moral Majority, Focus on the Family and “burn your devil worshipping rock music tapes” movements. She was just trying to do what she felt was the right thing. The right thing back then was to hand out tracks about the evils of Halloween and hold Halloween alternatives at church.

I distinctly remember our Halloween Parade in kindergarten. I wanted to dress up as a witch because some of the other little girls were doing so. Mama said no and that I could be an angel instead. She fashioned a costume for me with feathered wings pinned to a white dress. I think I had a golden pipe cleaner halo. I reluctantly wore my angel costume and walked alongside my witch friends. I remember one little boy saying to me, “What are you, a chicken?” I seem to remember being pretty upset about being mistaken for a chicken. I told my teacher that my mama wouldn’t let me be a witch because it was an “abomination to the Lord.” My teacher called my mother to discuss. She said her daddy was a Baptist preacher and she didn’t see a problem with children dressing up as witches, devils and other “abominations.” Mama stood her ground. I was never allowed to dress up as a witch or anything scary. Instead, we donned the homemade non-PC costumes of the 80s – gypsies, hobos and ladies of the night. (Yes, little girls dressed up like hookers back then!)

Might I add, not all churches had a problem with Halloween. In fact, some of the Baptist churches in the country embraced it by offering their own haunted houses. Tons of churches had them. They usually involved an old chicken house, Freddy Krueger, Jason from Friday the 13th and somebody’s daddy running around with a chainsaw. At the end there was a crashed car and somebody dying and seeing the Devil because they hadn’t been saved. Mama did not approve of the haunted houses but I think I finally convinced her to let me to go to one with some friends when I was 11 or 12. That’s what I saw.

Flash forward 25 years, and I’m still conflicted about Halloween. I don’t think it is Satan’s holiday (as with most Western holidays it’s a mix of Christian and pagan traditions). However, I do have a problem with super scary, gory or sadistic costumes as evidenced when my 8-year-old chose a bloody Scream face costume this year. I did relent, but convinced him to tone down on the bloody part. I know what Mama taught me. However, I know she later regretted being so legalistic. She did let us go trick-or-treating but we never decorated for Halloween. It just wasn’t a big deal holiday. Now Halloween is the second most commercially successful holiday in the U.S. In my neighborhood people go all out decorating their houses, throwing parties and "boo'ing" each other (a new trend: see Pinterest). I’ve had several friends admit that they enjoy it more than Christmas. There’s not the added pressure of gift-buying and skirting around religious differences. It’s just about fun.

Don't get me wrong, I do enjoy Halloween. Of course, I love all the sweets and wish I had a recipe for you. However, my camera is broken and all the cute things I want to bake haven’t happened yet. Yet, in spite of it all -- in spite of being a grown woman with children of my own -- as I was applying my gross zombie makeup on Saturday for our neighborhood Halloween Parade, I still had a little nagging feeling. You can't help how you were raised. I'm not quite sure how to be. I still struggle with how to balance the fun without glorifying murder, gruesomeness or the occult.  I guess it’s my inner angel battling my inner witch. Or, maybe I’m just a chicken.